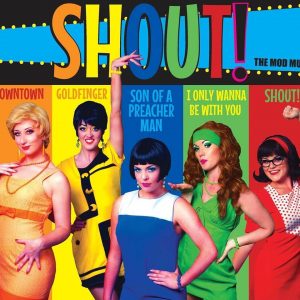 OK, so when Donna handed me the advertisement for Do R Die’s production of “SHOUT” in the Viking Theatre, Clontarf, my first thought was “I’ve so many shows to go and review this season. Do I really want to be stuck in a theatre for another night?” Then I instantly noticed the photo of Amy Penston and thought “Oh, maybe this might be fun, and I do love Amy on stage.” Then I read the synopsis. A “mod” musical, filled with the songs and styles of the 60’s, and sure, wasn’t that the decade of my formative years, and I do love a bit of nostalgia. Then I looked a little more closely, and noticed that underneath a terribly trendy wig, I also recognised the wonderful Jacqueline Brunton, star of Leixlip’s “Legally Blonde” and AIMS award winner for that role. And that was it. Two of my favourite ladies, and the music of my youth…. Definitely worth a visit.

Well, having walked through the doors of the theatre, I was floored by how small and intimate the venue was. I was almost sitting on the stage, which was accordingly narrow and rather cramped, albeit nicely dressed with the colourful lettering of “SHOUT” emblazoned on a black wall. My immediate thought was that this would be a cosy cabaret of five girls, sitting on boxes and singing a few old favourites, but how wrong was I? Very wrong indeed.

“SHOUT” is a simple stunning little cracker of a show, filled with wonderful music, superb comedy and mime, teasingly delicious storylines for each character, moments of true emotion, and pretty much non-stop movement. And what took it beyond the ordinary and into a realm of superlatives, were the performances of not just the two ladies with whom I was already familiar, but all five dynamic, dazzling and deliciously accomplished female performers.

Amy played the Yellow girl, who went on a journey from brash and bold to bruised and betrayed, and she captured each emotion with stunning sincerity, and perfect poise and timing. The moment when we realised that the once-pregnant character ended up childless was the most poignant moment of the show, captured in only a second, by superb facial anguish. Her vocals brought the house down.

Jacqueline proved yet again why I was so impressed with her in “Legally Blonde”, displaying that same breadth of talent that made her the perfect “Elle”. As the Orange Girl, she told the story of the neglected housewife with a combination of sincerity and self-effacement, bound together with an acute sense of comedy, and an excellent mime. Her vocals were equally inspiring.

And then there was adorable little Miss Red (Kelly-Marie Ni Cheallaigh), starting the decade as a confused and insecure teenager, and developing into a controlled and capable mother of five children. Her mime of a young lady discovering “the pill” for the first time, was comedy gold and superbly played, as was her smile, her sincerity and her delivery of her musical numbers.

Jody Ennis, in the role of the Blue Girl, was the epitome of vanity, forever primping and pampering herself, but underneath it all, dissatisfied with her love life until her moment of realisation. Again, this was a balanced and beautifully comedic performance, making the most of her opportunities to shine and delivering her vocals with secure passion. I’m not at all swayed in my praise by the fact that she planted herself on my knee during “Don’t Sleep in the Subway, baby!”…. well, it was a pleasant experience!

All five girls moved with effortless ease, with choreography (by Daniel “Cheech” Maguire) that was entirely appropriate to the era, and a big shout out to the technical geniuses behind this production, which hinged on the perfect timing of sound effects and voice overs. The unseen character of the Agony Aunt was vocally superb in her bland and out-dated delivery. Congratulations too, to Musical Director, Sarah Lynch-Barrett, for the wonderful recreation of the music of the era, and the meticulously rehearsed harmonies and arrangements. There were too many musical highlights to name them individually.

This is a show that should be sold out for the next few weeks, and then deserves to transfer to a bigger venue or a National tour. For sheer entertainment, I would urge everyone from the musical theatre world….. if you have a night free, DON’T MISS THIS SHOW!

Thank God I wasn’t there as an official adjudicator, for I’d be in a right tizzy now, trying to decide on nominations. These five ladies were pure gold! Thank you for an incredibly enjoyable night.